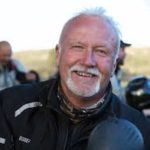 When I was first becoming interested in adventure motorcycling – watching BackCountry Discovery Route videos, and scouring YouTube for new ways to play with motorcycles it seemed Jim Hyde and RawHyde Adventures were ubiquitous. It’s no surprise considering how ingrained he is in the adventure community in America, and for that matter the impact he has had.

If you are unfamiliar with Jim Hyde he is the Owner of RawHyde Adventures, “The premier destination for Adventure Riding.” They have trained thousands of riders at their 4 training facilities located in California and Colorado. They also conduct tours all over the US and world, as well as hosting several unique riding events each year. He has a concept of playing hard in the dirt during the day and fine dining at night. This is a concept that many find to have a GREAT appeal.

I was fortunate enough to take Intro To Adventure and Base Camp Alpha in September 2015 and have kept in touch with the crew since. My current ride, a 2017 R1200GS, was purchased from them at the end of last year.

We stopped by to help the crew set up for their Adventure Days event earlier this year. While there I was able to enjoy a few minutes chatting with Jim and he shared some entertaining stories. He is always a great story teller, so I hope you enjoy today’s episode as much as I did talking with him.

In today’s episode we talk about:

Jim & RawHyde Adventures can be reached at:

Also mentioned in this podcast:

Exuberance of the Day

Traveling North on the Dalton highway at a good clip. Enjoying my day and feeling top of the world thinking I am doing something so out of the ordinary, (extreme in some people’s book – which just adds to the momentary enjoyment), that most people will never have an experience as unique as this! It’s an exhilarating feeling…
… and then I pass a bicyclist.

We’re on the North Slope of Alaska riding across arctic tundra where no tree grows and there is over 200 miles between camp stops. How? Why? What motivated you? Peddling the whole way?Nothing so impresses me as to see people taking THIS kind of challenge. It’s one thing to ride a motorcycle that is built for almost any terrain and capable of carrying large loads to the middle of nowhere. To ride a bicycle with clothing, food, camp, etc. is a truly impressive feat in my book.

And bicyclists are everywhere!!!

I do not mean to highlight this particular rider, because there was not only one on that long lonely beautiful road. I see them everywhere! Yesterday I met a young man from Beijing, China, named Yu Yang, who has spent the past two and a half years traveling on bicycle from Ushuaia, Argentina to Haines Junction, Yukon Territory, Canada where I met him. He is on his way to Prudhoe Bay, Alaska and hopes to get there before the weather gets too poor to cycle. He’s heading into the place that we’re heading away from because the weather was getting to cold to ride!

BTW: He’s also spent years riding across India and Afghanistan, and from Ethiopia to South Africa. He wrote a book about his ride across Africa which is helping to fund this trip.

All-in-all I have met some truly amazing and incredible people while on the road; far beyond what I could have imagined before we left. I guess I’m still discovering much of the magic of traveling.

People riding bicycles from Ushuaia to Prudhoe Bay… I may have to add bicyclists to the interview lineup. After all, they really are Travelers On Two Wheels!

I really do look forward to future discoveries. What next?

Sliding Sideways in the Dirt at
RICH OLIVER’s MYSTERY SCHOOL

After street riding for so many years I was honestly excited and intimidated by the idea of taking a motorcycle and sliding sideways through turns in the dirt. That is exactly what Rich attempted to teach me during his two day Fun Camp, and boy was it a good time!!!

Besides being an excellent instructor with a wicked sense of humor, Rich has quite a bit of racing credibility. He is a retired American Motorcyclist Association professional road racer whose credentials include Five National Road Racing Championships and over 71 race victories.

You may ask what a winning road racer is doing teaching a school on flat track dirt racing. We will delve into the correlation between the two and how you too can benefit as a street rider from learning to ride off-road. As well, dirt riders of all kinds can learn new skills along with a boat-load of fun by coming out to play at his Mystery School!

As a consummate student I enjoy studying about the ancient Mystery Schools. I wondered why Rich named his school as he did. You can find the answers to this and more at his Frequently Asked  Questions page at: https://www.richoliver.net/pages/faq

In today’s episode Rich talks about:

Also mentioned in this podcast:

Sharing the stories of those who choose the other path…